A comparison between the ebola and marburg viruses

The virus is transmitted to people from wild animals and spreads in the human population through human-to-human transmission. The — outbreak in West Africa involved major urban areas as well as rural ones. Community engagement is key to successfully controlling outbreaks. 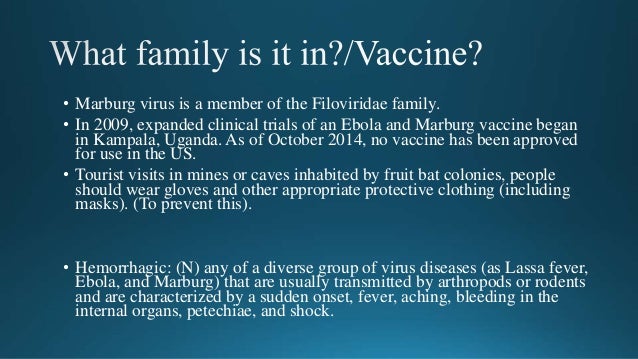 Lipids The viral envelope is derived from host cell membranes and is considered to have a lipid composition similar to that of the host-cell plasma membrane. Carbohydrates The spike glycoproteins of filoviruses are highly glycosylated with N-linked glycans of the complex, hybrid and oligomannosidic type, and O-linked glycans of the neutral mucin type.

The GP1,2 proteins of marburgviruses and ebolaviruses are acylated at their C-termini and form homotrimers. Genome organization and replication Filovirus genomes are characterized by the gene order: They demonstrate a significantly high complementarity at their very ends.

Genes are flanked by conserved transcriptional initiation and termination polyadenylation sites. Most of these overlaps are extremely short and limited to the highly conserved pentamer. There is a single gene overlap in marburgvirus genomes, but several 2—3 gene overlaps in ebolavirus genomes.

The functional significance of these short overlaps is unclear, but transcriptional attenuation of the downstream gene has been postulated for other viruses of the order Mononegavirales. The replication strategy of filoviruses is not well studied.

Ultrastructural studies indicate an association of viral particles with coated pits for the initiation of infection, suggesting that filoviruses enter cells by endocytosis; molecular studies in part confirm this but are contradictory in terms of which endocytosis pathway is used.

Uncoating is presumed to occur in a manner analogous to that of other mononegaviruses. Transcription and genome replication take place in the cytoplasm and, in general, follow the models for members of the families Paramyxoviridae and Rhabdoviridae.

Transcription starts at the conserved start site and polyadenylation occurs at a stretch of uridine residues within the termination site. Replication involves the synthesis of full-length positive-strand copies antigenomes.

The expression strategy of ebolaviral GP genes is distinct from that of marburgviral GP genes and involves transcriptional editing Figure 2. Editing results in the expression of either full-length GP1,2 or a secondary secreted glycoprotein ssGP. Antigenic and genetic properties Filovirus infectivity is poorly neutralized in vivo, but at least two potent neutralizing antibodies have been described that are potent in vitro Sudan virus: There is only limited antigenic cross-reactivity between marburgvirions and ebolavirions.

At least five genetic marburgvirus lineages exist. Virus genomes of four lineages Marburg virus differ from each other by 0—7. The variation in genomic sequences has been shown to be low among isolates of individual filoviruses: There seems to be less or even no genetic variability between isolates from different patients of single outbreaks.

All data indicate a remarkable degree of genetic stability over time. Biological properties Filoviruses are endemic in Central Africa in an area approximately between the 10th parallel north and south of the Equator as indicated by the locations of known outbreaks, and in the Philippines Reston virus only.

There is no known connection of virus spread with any vector. · comparison between cohorts of injection drug users and homosexual men. J Acquir Immun This result indicates that Ebola viruses circulating in Gabon were stable during these two Ebola, Lassa, and Marburg (“CRELM” test). 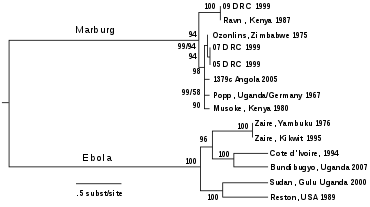 All gave negative results as did sera from the first Ebola epidemic in Gabon, demonstrating the lack of sensitivity ashio-midori.com(05)pdf. · Taxonomic Proposal V 1. Proposal: To change the species name organization, genetic elements, and comparison with the genome of Marburg virus.

Virus Res were discovered. The sequences of the genomes of Marburg and Ebola viruses and partial sequences of other representatives of the family were determined. ashio-midori.com  · The Filoviridae family contains the Ebola and Marburg viruses. These are enveloped viruses composed of seven genes which encode eight proteins in the Ebola virus and seven in the Marburg virus [1].

The single-stranded negative-sense RNA genome is encased in a nucleocapsid complex, which consists of the following four viral proteins: the ashio-midori.com?id=/ashio-midori.com Nature and History of Ebola Virus: An Overview Development and evaluation of a fluorogenic 5' nuclease assay to detect and differentiate between Ebola virus subtypes Zaire and Sudan.

Although there is no such exact scientific name for ebola virus, yet it gets its name from the Ebola River Valley in Zaire (presently being renamed as Democratic Republic of Congo).ashio-midori.com  · In , a Marburg haemorrhagic fever (MHF) seroprevalence survey was conducted in the Efé pygmy population living in the Watsa region in north-eastern DRC, where an MHF outbreak occurred between and ashio-midori.com